Worst train wreck in the history of Sweetwater County killed 14 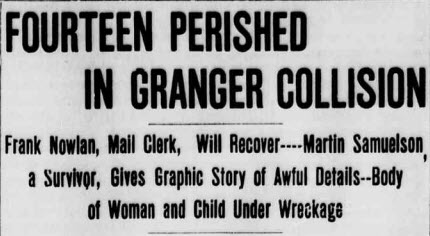 The caller requested information about Marston and Azusa, sidings he believed once existed between Green River and Granger. Working from a special United States Geological Survey map from 1915, museum researchers identified the locations of the Marston and Azusa sidings and the location of what is often called the Azusa Wreck.

At about 11:59 PM on November 11, 1904, a westbound passenger train, Passenger Number 3, collided head-on with an eastbound freight, No 1661, some four miles east of Granger

The impact was horrific and 14 people were killed, including both engineers, two firemen, a brakeman, a conductor, and several passengers. The conduct of the Union Pacific operator stationed at Granger, who was responsible for train orders and scheduling, came under scrutiny, and a  coroner’s jury empaneled by Sweetwater County Coroner Mike Dankowski on November 18 ruled that

“We the jury further find that said collision was caused by the carelessness and gross negligence of J.E. Miller, the operator at Granger, Wyoming, in furnishing wrong orders to the conductor and

engineer of said freight train and the carelessness of said conductor and engineer in leaving Granger, Wyo, under such orders.”

According to newspaper accounts and testimony given at the coroner’s jury, Miller dropped out of sight immediately after the crash.

Staff members at the museum are searching its archives for photographs of the crash, though none have come to light as of yet.